Making my way towards the Outer Banks (OBX), first passing through to Roanoke Island. Signs on the highway became funny and beach-related: parasailing, water parks, best surf beaches. Many big yellow WINGS stores…I thought at first they had Buffalo Wings, but no, they are swimwear and beach wear stores. By mistake I made a left instead a right and I decided to continue, and that took me to Duck, NC. Small town with charming houses, a small colorful downtown with marine shore vegetation. It was warm and drizzling, but kids were biking, people were out and about, some rain did not bother them from enjoying the day. In NYC, early morning 90% of the population would be equipped in fashionable rain boots, and carrying an umbrella with them, and Chinese and African umbrella vendors would be in business since the crack of dawn. I liked this about the people here, they seemed more nature friendly. From Duck I followed Route 12 which was winding through very strange looking forests with short trees, twisted pine trees, and various bushes and cypress, they were lush and green. The houses here seemed taller then I realized why: they were all built on tall stilts, to prevent flooding, which was pretty often given the outer banks are long thin strips of land with the mighty ocean on one side (surf side) and the Bay on the other side (sound side). Arrived in Corolla, NC. Here I noticed many shops that rented bikes, boats, and jeeps that offered adventure tours. Being in a 4 wheel drive, I went on till the road, the only road on the island, ended in front of a wooden fence. The beach started and a few yards away I could see the Ocean. A sign indicated that no ATVs or regular cars only 4WD. Great, let’s go on, and I arrived on a jeep beach! It was a marvelous sight, a long wide beach between tall sand dunes and the foamy ocean. Wind and intermittent drizzle, which means a spectacular cloudy sky great for photos. The beach is 8 miles long and it runs north till the border with VA, where it is fenced off for vehicles, but  a gate was opened for people. Drive back through Duck, to Devil Kill Hills, passed that strange named town, and Tangier outlets, build on stilts on the sound side of the island, and saw a bunch of people running in the sunset on huge sand dunes. It was a national park with great sunset views from the top of the dunes. Pushed forward on Pea Island. These people really were creative with names, at least it is not Vienna or Paris. All streets had ocean related names, whether Surf, Turf, Dolphin, Seaweed Road. Better than Main Street or Fifth Avenue.  Passing through Rodanthe, as in the Richard Gere movie “Nights in Rodanthe”. I wanted to stay there but there was no vacancy. A nice guy from Serbia at a gas station in the next town of Avon directed me to Buxton, to a great small motel owned by… Serbians.  Ate at Pop’s – a shack with excellent food. Small room with a bar in the middle, everybody wants to be at the bar, there were no more spaces available so I had to be happy with a corner table from where I could observe the whole room. I had the best clam chowder ever and a scrumptious, juicy ½ lb of scallops. Everybody but me was ordering burgers, they must have been sick and tired of all the fresh and delicious seafood that is always available. 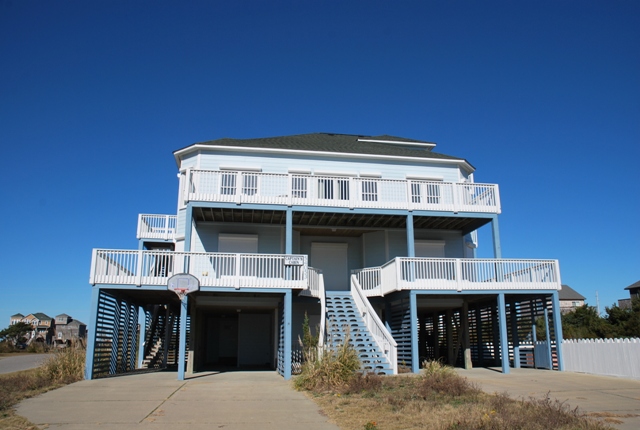 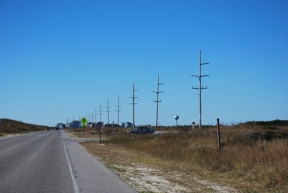 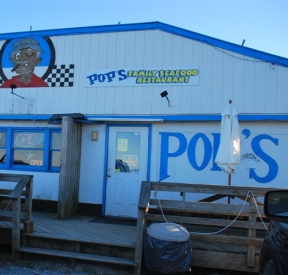 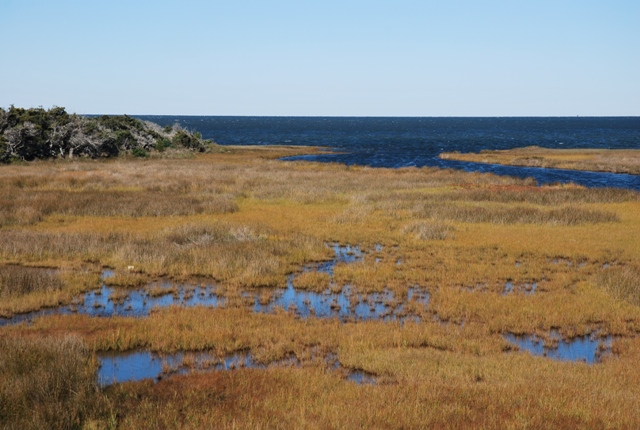 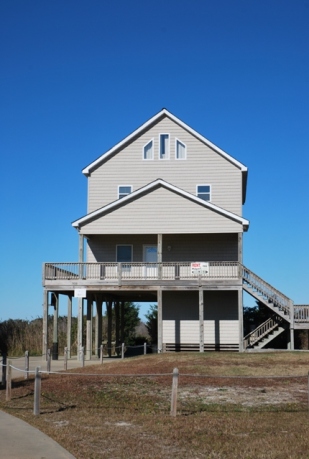 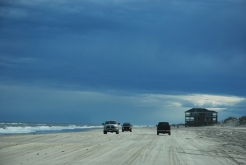 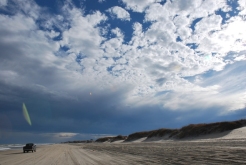 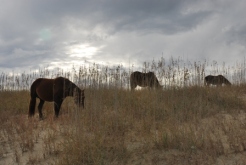 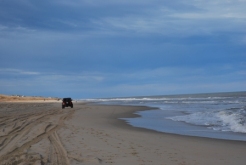